If you have been regular on Twitter, you might have seen some advertisements on this platform as well. Although, any type of advertisement online would come under the banner of native advertisements. And just like that, in this also, we have different types of Twitter Ads.

So, in this blog, we’ll learn how to run Twitter Ads with the help of the Twitter Ads Manager.

We understand that Twitter Ads Manager is a bit difficult to work on. So, for that reason, we’ve brought a more simplified version of the Twitter Ads guide.

There are different types of Twitter Ads that you can use for your business. Just like any other campaign type on different platforms, Twitter also offers various types of Ads that we can run.

In order to serve different types of business models, Twitter for business is a must use.

We’ll also go through why should we advertise on Twitter. Benefits of Twitter Ads and why they must be used. But for now, let’s see the types of Twitter Ads one can expect – as of this month 2022. 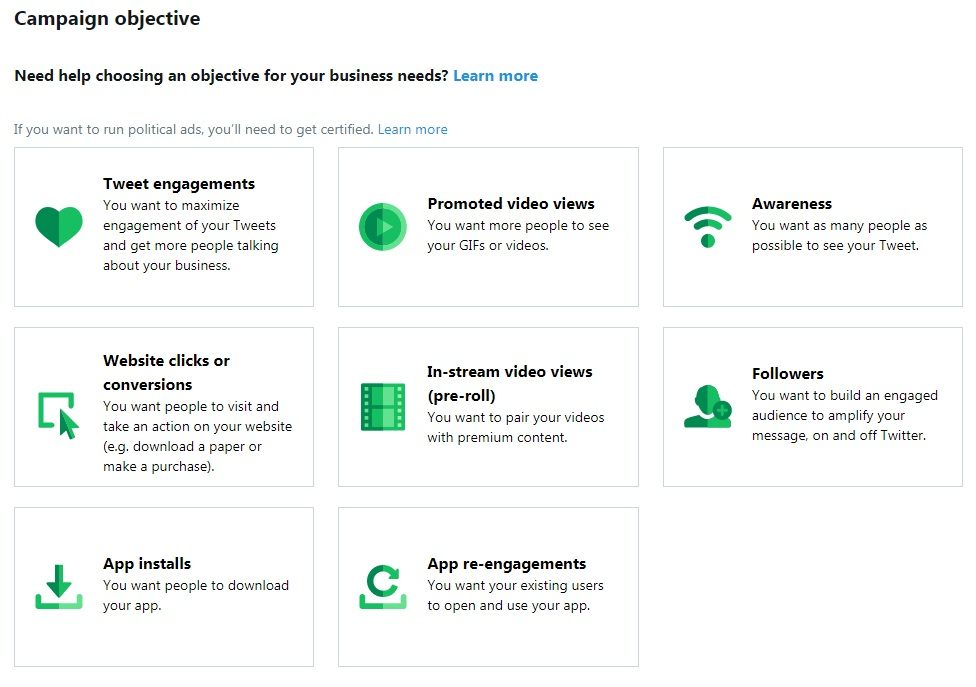 So these are the eight types of Ads you can run on Twitter.

Now, let’s take each Ad type one by one and understand how they could help an advertiser.

Let’s see how Twitter works before going deeper into the platform.

This means that you need to incorporate your Tweet in that limit only. You can not exceed your Tweet by 240 characters.

Then comes Hashtags. This is what made Twitter famous. A Hashtag is a form of special character that helps in segregating Tweets in different categories.

For Example, if someone writes their tweet and uses #DigitalMarketing in it, then a category would be created on Twitter where all the other posts would appear that have the same #DigitalMarketing written in it.

In the Hashtags as well, we have the Top, Latest, People, Photos, and Videos option. This means that you can further segregate which type of content do you want to see for a particular Hashtag.

In the screenshot below, you can see how Hashtags are classified and work. 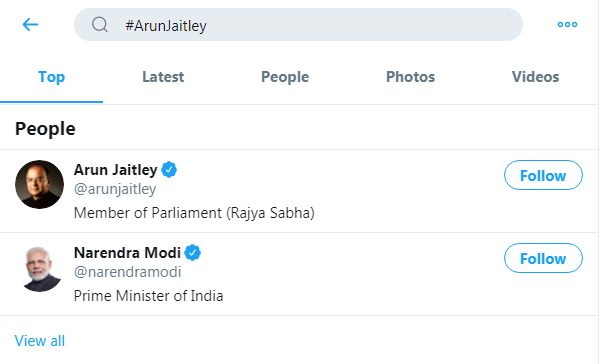 Now, the most differentiating factor of Twitter is this Retweet button. The retweet button helps you to share the Tweet on your profile. Let’s take an example for this one.

Here, just below the link preview, you can see a button that has 21 written on its right hand side. That’s the comment button.

The button with 539 written on its side is a Retweet button. The retweet button is a way of supporting someone or making something widely available to other people as well.

So, here in this tweet, we can see @SadhguruJV asking for people to go on a link to make an impact on saving rivers. So, all those people who want the message to spread to more people, they’ll click on the Retweet button to share it with their friends and followers on Twitter. So this is how Twitter works.

Now that we know how Twitter Works and we’ll continue with the Types of Twitter Ads that we can run.

On the campaign screen, select the Twitter engagements option. So, what this option would do is that it will help you get more engagements on your Tweet. So, Twitter will show your Tweet to those profiles which would be more likely to engage with your Tweet.

This would be charged per engagement that you receive on your Tweet through the campaign. And here, the best part is that Twitter will not charge you for the organic engagement that follows.

The procedure to run Twitter Ads for engagement is very simple.

In the campaign objective screen, select the Tweet engagements option.

Then give your campaign a name and set a budget for the day and the total budget as well. 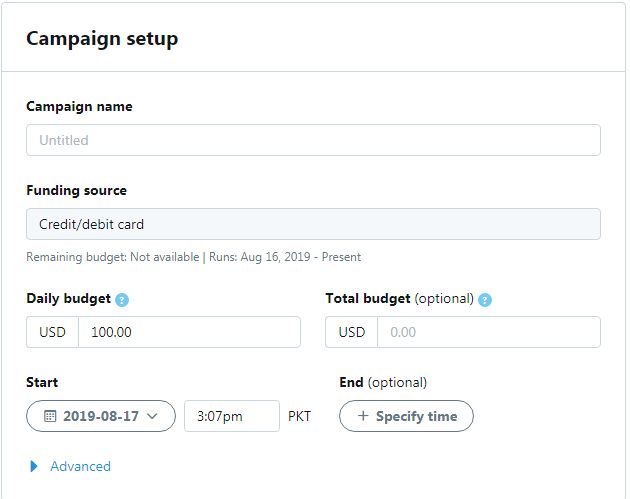 After this step, you can go and check out the Ad Group level. At this point, you’ll have to give the Ad group a name, specify a start and end date, the total Ad group budget, and then select the bidding type.

After this step, you will have to target an audience to which you want to show your Tweet to.

You may choose to select people based on these four factors.

After that, when you scroll down, you will see more options to target people. Based on different demographics, you can target people who would be seeing your Tweet. 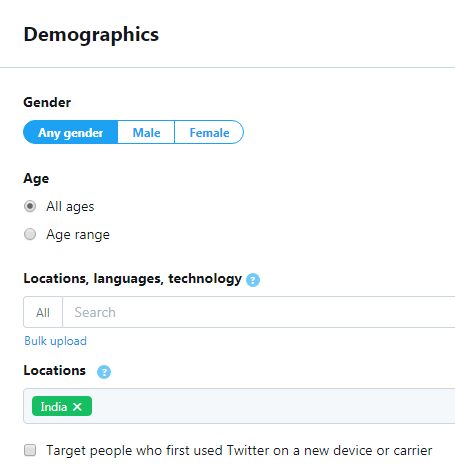 In the Locations, languages, and technology heading, you can target people on the following criteria:

So, as per your tweet and the availability of its target audience, you can select different options here. And once it’s done, you’re all set.

After this step comes the most complex part of targeted people on Twitter. This step is to define the demographics and behaviors of the people you want your Tweet to engage with. 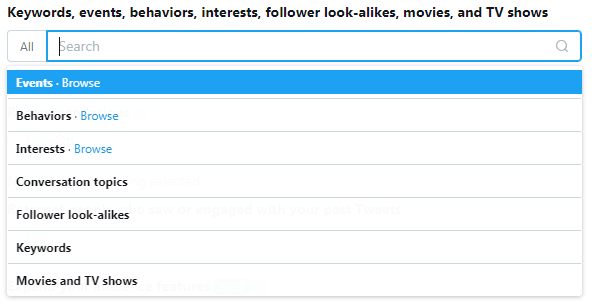 Now based on these many options, you can choose to target different people for different audience types.

Other than that, you can select whether you wish to receive recommendations on targeting people and expand your audience feature just in case Twitter thinks that your Ad can perform better on a different or a completely different targeting.

So, this way, the Twitter Ads manager helps you in reaching out to the required people. 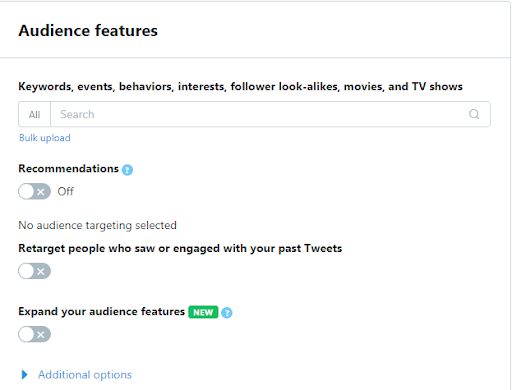 Once you are satisfied with your targeting, you can proceed further with the Creatives section. Here, you can select which Tweet do you want to run Ads on.

Twitter for business is famous for this very reason. You can boost the same Tweet that you have made weeks ago or even years ago.

Also, the plus point is that you won’t be charged for the organic engagement that you’ll receive after the Boost.

You can click on the preview button and see how your Tweet would look like after being published as an Ad on iOS, Android, or desktop.

Once you are fine with all the settings, you can click on Next and you’ll be redirected to the Review menu where you can review all the things that you have done. And finally, launch the campaign.

So this was all about how to launch the Twitter Engagement campaign.

This is the same case with Promoted Video Views and Brand Awareness. 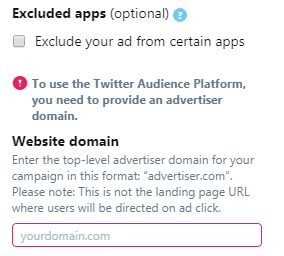 In the website clicks or conversion campaign, you’d have to enter the website to which you want to lead traffic.

Then comes the In Stream Pre Roll Video Ads which will run before and in between popular videos of popular content creators on Twitter. This way you can capture the exact same audience that you want to via your competitors or some content creators.

Just like that, the basis of advertisements on Twitter via the Twitter Ads manager is the same for all the different campaign types. Twitter for business has been very much simplified and you can easily create or run Ads like a pro. 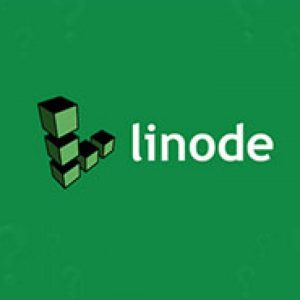 Linode Pricing 2022: Choose the Right Plan for Your Website

Last Updated on November 24, 2022 Linode is one of the best and fastest-growing cloud hosting providers in the market. Although Linode pricing is a bit ambitious,… What’s the Difference Between Nordpass Premium and Free Version?

Last Updated on November 23, 2022 NordPass is among the best password managers in the market. Moreover, the tool offers both NordPass premium and a free version….

Last Updated on November 22, 2022 The name Dreamhost and Bluehost are often found in the list of best-hosting providers. Both services offer excellent features, performance, and… Last Updated on November 22, 2022 Whether you are a digital market, affiliate marketer, or blogger, a professional and eye-catching landing page is required. Leadpages is one… Leadpages Vs Clickfunnels: Which Should You Choose in 2023?

Last Updated on November 21, 2022 There is no shortage of landing page builders in the market, and the names of Leadpages and Clickfunnels are often found… Wix Vs Weebly: Which Web Builder Should You Choose in 2023?

Last Updated on November 21, 2022 Wix and Weebly’s names are often found in the list of best website-building platforms. Both platforms offer an array of tools…